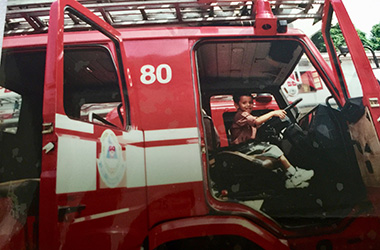 SingaporeforKids is delighted to feature an article by a young man doing his National Service in Singapore. He is with the Civil Defence and his take is an inspiring and very timely message to parents and kids.

An opportunity for kids to meet today’s Everyday Heroes – not the Batman, Superman or the Robin of comic books. Today’s Everyday Heroes are also the Firemen, the Urban Search & Rescue team, the Paramedics. And they are real. They go out, every day – from homes like yours – to work, help and support families and communities in distress.

SGFPC Expo is an annual event held by the Singapore Civil Defence Force that showcases the skills of the firefighters from around the world. It is an opportunity for the public to learn some life-saving skills while trying out some of the tests that firefighters have to undergo to qualify to become a firefighter. Teams from across Asia, the UK and Australia take part in this challenge to see which country has the most elite firefighting and rescue forces.

The teams are tested in their skills in speed, efficiency and expertise in a series of planned activities. Fires are put out, dummies weighing 20kg are strapped to the back and sped to an ambulance, paramedics assesse injuries and give first aid and CPR … all done efficiently and calmly without missing a step or the rhythm. Colourful mascots with their cheerleaders cheer them on to piping music.

SCDF’s event Lifesavers Connect shows off some of their latest equipment – firetrucks, ambulances, HAZMAT decontamination vehicles … all top of the line equipment and vehicles. Members of the public are given a chance to try using a fire extinguisher to put out controlled fire on the hood of a car.

They can also try to rescue a weighted mannequin from a hole using piece of rescue equipment known as a Rollgliss system and there are displays of some of the tests firefighters have to go through in order to qualify as a firefighter in Singapore.

The tests are not too hard to do in civilian clothing. However – with a bit of imagination – it gives the public a glimpse of how tough the reality for firefighters actually is when done in full firefighter gear – which is heavy – and while breathing using a breathing cylinder.

An exciting event where kids learn, watch and participate in some of the activities.

If you missed it this year, don’t worry. It’ll be back next year too!

So, kids, if you ever dreamed of becoming a hero, you don’t need to look too far. Your friendly fire station is right next door.

The Fire Station Open House is held every Saturday from 9.00 a.m. to 11.00 a.m. Walk in and learn more about the life in a fire station.

SingaporeforKids salutes all the boys who spend two years of their life learning how to be heroes for their country.

Whose dreams are they living ?

Is Gaming good for children ?

The importance of learning a second (or third) language