Garden City or City in a Garden ? 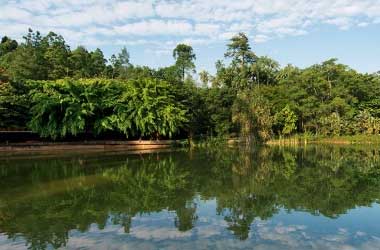 Garden City or City in a Garden ?

It is a universal, daily iteration – whether you are a resident or a visitor – those times in a day (and especially in summer) when you pause to appreciate the luxury and abundance of ‘green’ in Singapore, the oases within the concrete, the magic of sun filtering through foliage onto asphalt, the pleasures of walking beneath a verdant canopy of leafage.

Urban greenery is taking over Singapore – almost 30% at the time of writing (December 2018). A study by researchers from the Massachusetts Institute of Technology and the World Economic Forum places Singapore ahead of 16 cities (including Sydney and Vancouver) in urban tree density.

These simple pleasures are just heartbeats away from traffic and high rises, glass and steel, minutes from homes and schools, malls and restaurants, hawker stalls and supermarkets.

What is the story behind this ‘Garden City’, one which not only provides shade along walkways and roadsides, but also fruit trees and flowering and fragrant plants in residential areas, community centres, schools and hospitals … even police stations ?

It began with an articulated ‘greening policy’ strongly supported by former Prime Minister Lee Kuan Yew who saw a green Singapore being a competitive advantage in attracting foreign investments into the country. A Tree Planting Campaign was launched in 1963, beginning the greening of a un-green island. Today, every tree, plant or bush along the street is planted according to strict guidelines set by the National Parks Board (NParks).

Quick-growing indigenous trees were identified and the drooping, dome-shaped Angsana, with its yellow flowers (that carpet the ground with blossoms in the mornings) became a favourite; it provided extensive shade, grew fast, was easily available and is relatively easy to maintain.

The most common tree in urban Singapore – defining many roads and motorways – is the Rain Tree with blossoms (when it blooms) of clusters of pin-white flowers resembling upturned brushes.

Proud and prolific in various parts of Singapore are the drought-resistant Yellow Flame (with crinkled yellow flowers that look like crumpled bits of tissue), the Trumpet Tree (thick with pink and white blossoms in April-May and August-September), the Sea Apples (which used to serve as firebreaks when Singapore had large fields of flammable lalang grass), the Sea Almonds, the Tembusu (with branches low to the ground and redolent – in season – with creamy white flowers), the Senegal and the Broad-leaf Mahogany, and the Saga which offers shade and played an important part in the precious metal markets of yore – four of its seeds (which weigh a gram) were used as weight measures for gold and silver.

Flowering shrubs such as the ubiquitous, eternally blooming, riotously colourful bougainvillea – embellish the free-flowering trees (there cannot be a single person who has not commented on this on a drive to – or from – the airport), and planting areas – verges – line the roads (new, minor and major), verdant with flora.

Paved areas (such as car parks) are required to provide land for trees to offset the asphalt surfaces and concrete structures like flyovers, overhead bridges and retaining walls are covered by creepers (ficus pumila and other climbers) or screened by shrubs and transplanted trees.

Spaces in urban commercial areas are set aside for parks. Developers of residential areas have to incorporate open spaces in their plan and design, besides planting verges with trees. The planning of parks takes population and accessibility into account; each is innovatively designed to both use and enhance its natural assets, and each tries to offer a unique identity – perhaps installations of sculpture or challenging playgrounds or by just creating a habitat that attracts certain wildlife such as birds.

Initiatives such as the Heritage Trees Scheme and the Heritage Roads Scheme protect majestic, mature landmark trees as well as roadside treescapes that contribute to Singapore’s physical landscape.

The Eco-Link@BKE is an ecological bridge, 50m wide,  that spans the Bukit Timah Expressway, connecting Bukit Timah Nature Reserve and Central Catchment Nature Reserve. The first of its kind in Southeast Asia, its main purpose is to restore the ecological connection between two nature reserves, allowing wildlife to expand their habitat, genetic pool and survival chances. When the BKE opened in 1986, bisecting the land, animals trying to cross over to the other side in search of food or mates often ended up as road kill.

This green bridge is planted with grass and native shrubs and trees (like the Senegal mahogany, tembaga, jambu and durian), creating a habitat for wildlife when animals and insects move in, and offering creatures from both fragmented forests the opportunity to colonize and propagate.

Singapore is home to more than 2,000 species of plants and 800 species of animals. It is also home to one of the only two primary rainforests in the world to be located near a city (the other is the Tjuca Forest in Rio de Janeiro, Brazil). This is the Bukit Timah Nature Reserve & Central Catchment Reserve, which together contain more trees than the entire continent of North America.

To experience Singapore is to live, work and play against a backdrop of living green. Open your door to the swoop of the kingfisher and vibrant bird calls – the strident cuckoo, the argumentative mynah, the screeching cockatoo and the squawking parrot, alongside quieter hummingbirds, sun birds, golden orioles, green pigeons and bulbuls.

Singapore’s ‘green lungs’ offer not just a lavishness of flora, but much more – unimagined encounters with winged residents (and serpents), endless opportunities for recreation, relaxation, sport and idling, neighborhood socializing and other respites in the course of an ordinary day.

Information sourced from The Straits Times, the National Parks Board and other sources.

Whose dreams are they living ?

Is Gaming good for children ?

The importance of learning a second (or third) language