The Far Side of the Moon

The Far Side of the Moon 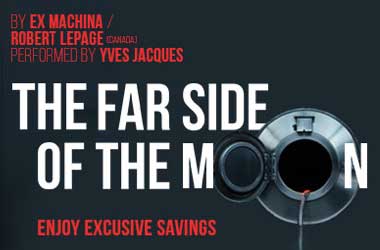 Not often does a play like this come around … dance, opera and music mixed with recorded arts – filmmaking, video art and multimedia. Take the kids. Three shows only.

Recommended for ages 12 and older though admission offered for children from 6 years.

“A stunning theatrical work that makes the universe more understandable while also making it more mysterious. You can’t ask much more than that from a work of art.”

Set against a backdrop of the race to the moon between the Americans and the Russians, The Far Side of the Moon casts its cosmic gaze on Philippe, a struggling introverted philosopher, and his younger brother André, a successful TV weatherman—an estranged pair drawn together, coming to grips with the death of their mother.

Canadian theatre visionary Robert Lepage’s iconic The Far Side of the Moon premiered in Québec in 2000, and has since been presented in over 45 cities all around the world.

Performed solo by the critically acclaimed Yves Jacques, Lepage’s master work of poignant storytelling is visually stunning and technically exquisite, an emotionally arresting exploration of both outer and inner space.

The production contains strobe effects and some drug and sexual references.

There will be a post-show dialogue with actor Yves Jacques after the 2nd November, Saturday, 8.00 p.m. show @ the Circle 2 foyer.

Two hours with no intermission.