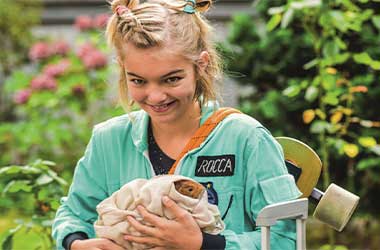 How (even) a child has the power to change the world.

A part of Cana Film Festival (CCF) 2021, this film is about eleven year old Rocca – brave funny, and one of a kind. She lives a rather unique life. While her dad is watching over her as an astronaut from outer space, Rocca lives alone with her squirrel and attends a normal school for the first time in her life, where her carefree and non-conformist way of life instantly stands out. She fearlessly confronts the class bullies, because she stands up for justice. She makes friends with the homeless Caspar and tries to help him. All the while she is also attempts to win her grandmother’s heart.

Suitable for all, but recommended that parents guide their children.

” … full of phantasy, ideas, the vision of justice and carried the conviction that children can change things in a big way for the greater good – in an unbridled, wild and wonderful way. What is needed is curiosity and courage. Both of these traits are found in Rocca, the strong and unconventional protagonist. Having been raised in a camp for astronauts, she moves to Hamburg and turns the world there upside down with her very own worldview. The solution is often closer and less complicated than adults make it out to be. And thus she shows everybody how easy life can be, when we stand up for each other and work together to get things done. And it’s lots of fun, too. It’s not a new idea to teach children to be nice to each other, but Rocca does it in a different way: she doesn’t dictate the ways in which we should act, but her questions will stay in your mind. And questions change the world. Just like Rocca.”

(CFF) is a biennial event that consists of film screenings and panel discussions centred around social themes.