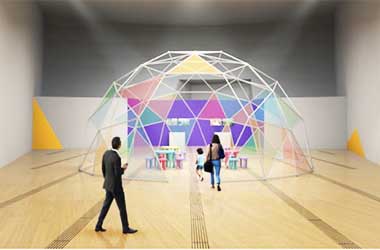 The world and ideas of an American inventor and visionary are showcased in Radical Curiosity: In the Orbit of Buckminster Fuller.

Mr. Fuller worked across multiple disciplines including art, architecture, design, engineering, metaphysics, mathematics and education; he explored and addressed journalling, big data analytics, sustainability, maximizing the earth’s resources … issues as relevant today (even more so) as it was at the end of the 19th century. Mr. Fuller’s groundbreaking ideas and practice – more than 180 items – are now accessible to view, including a journal he began in 1920 and kept going till his death in 1983; he took notes of his life every 15 minutes!

In the early 1950s, the various lines of Mr. Fuller’s inquiries converged in his most successful project, capturing America’s collective imagination and becoming an iconic and enduring symbol for the future: the geodesic dome, a product of his obsessive study of the rules of geometry. Geodesic lines mark the shortest possible path between two points on a sphere. Fuller theorized that this principle of efficiency could be used to design a stable structure. Effectively, the strength of a dome based on geodesic lines is greater than that of its separate elements.

A geodesic structure is also the greatest area that can be covered with the least amount of material and can support itself without the need for foundations. It represents the culmination of the idea that more cannot be achieved with less. By the time of his death, thirty-five years later, between 100,000 and 200,000 geodesic domes had been built around the world.

Singapore’s Jewel Changi Airport references the geodesic dome, as does the ArtScience Museum.

There are three areas for children to explore and play in the Build-it-like Bucky Playground!

Dome – materials to create your own dome and tensegrity structure.

Toys on Shelves – interactive toys and puzzles inspired by Fuller’s inventions and concepts.

Children must be supervised by an adult at all times*