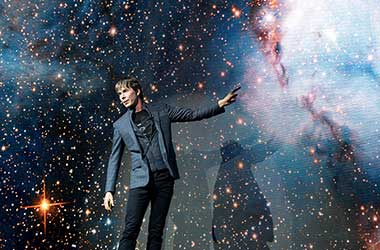 The value of science. How we acquire scientific knowledge. Why we should trust it.

For the curious and those fascinated by science – Professor Brian Cox offers a fascinating insight into the workings of nature at the most fundamental level using state of the art graphics and imagery from ground-based telescopes and space probes.

“We live at a pivotal time for our civilisation. We have access to an ever-increasing library of knowledge about nature and understand a great deal about the fundamental laws that govern our Universe. Science has extended and enriched our lives beyond imagination, and yet we are living through a time of great danger, with cynicism and suspicion of scientific knowledge on the rise. I believe very strongly that astronomy and cosmology deliver a vital perspective on our place in the Universe; we are at once tiny and fragile and yet filled with potential and value, and my ambition is for UNIVERSAL to be an exploration of our knowledge and a celebration of our humanity.

Who is Professor Brian Cox ?

Recognised as the foremost communicator for all things scientific, he is one of the preeminent physicists in the world, Professor of Particle Physics at The University of Manchester, The Royal Society Professor for Public Engagement in Science and a Fellow of the Royal Society. He has presented a number of highly acclaimed science programmes for the BBC, boosting the popularity of subjects such as astronomy and physics and garnering a host of accolades, including two Royal Television Society awards and a Peabody Award for Wonders of The Solar System.

He has also authored a series of best-selling books, including the widely acclaimed Human Universe and most recently, Universal: A Guide to the Cosmos, and is .

His critically acclaimed BBC series, Forces of Nature, aired in 2016 and he co-hosts Stargazing Live in the UK and Australia.

Approximately 2 hours and 30 minutes with a 20 minute interval.