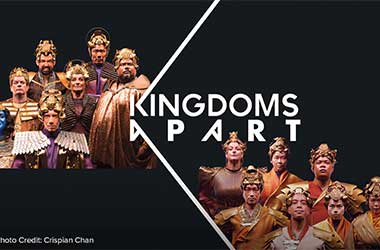 A contemporary take on the Indian epic The Mahabharata brought to life through multiple cultural influences and disciplines.

A part of Esplanade’s In New Light : A Season of Commissions, this is the story of the Pandavas and the Kauravas — two groups of cousins — who struggle for political power and the claim to the dynastic succession to the throne of the Hastinapura, an Indian kingdom. The confrontation climaxes with an 18-day Kurukshetra War in which even the gods are involved. Unimaginable death and destruction ensue, and all on the battlefield are forced to face up to their dharma—their duty and purpose in the universe.

With the audience seated in the performance space, the Pandavas and Karavas families from The Mahabharata are transported from epic mythology into the 21st century through a gripping narrative odyssey of war, politics and family feuds. A multicultural ensemble cast from Singapore, Malaysia and Japan perform in front of, and around the audience.

3 hours with a 20 minute intermission.

Recommended Ag e: 16 and above
Admission Age : 13 and above
Language : Performed in English, with some Japanese, Tamil and Malay.
Subtitles in : English